Home - Elections - Role of the PFCC

Role of the PFCC 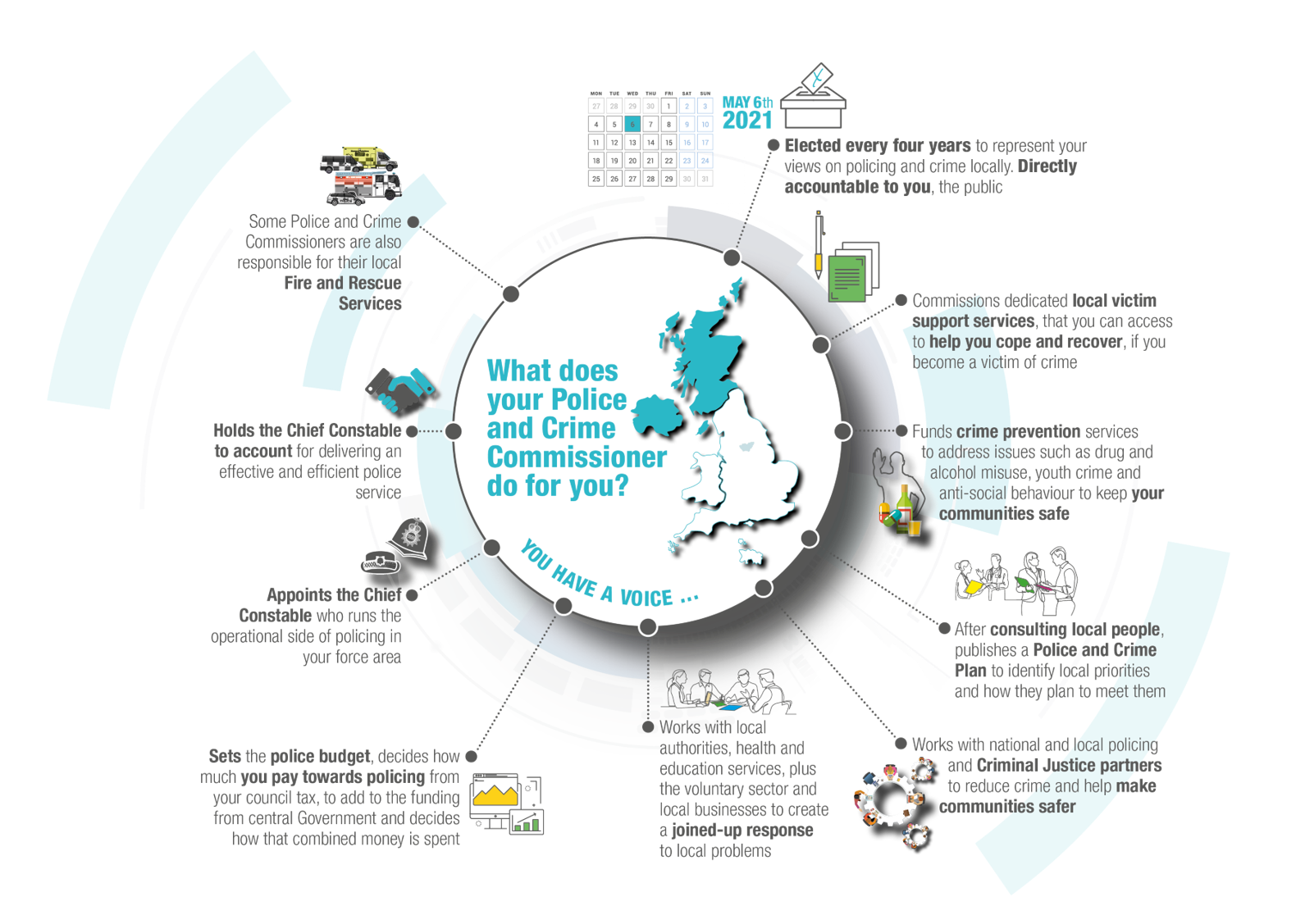 The framework provides clarity to the way that the two corporations sole, the Police and Crime Commissioner and Chief Constable, will be governed both jointly and separately, to do business in the right way, for the right reason at the right time and ensure efficiency, effectiveness and value for money.

Where are PCC statutory duties set out?

There is no single piece of legislation where this is all set out.

Police legislation has evolved over many years, and some of the laws applicable to PCCs go back several decades. In addition, local government legislation plays a part in regulating what PCCs can do, particularly in relation to some aspects of finance.

However, the key duties of PCCs are mainly set out in two Acts:

The former Act established PCCs and set out their main functions, while the latter sets out many of the duties which were transferred to PCCs from predecessor organisations.

More recently the Policing and Crime Act 2017 (P&CA) also impacts the powers and responsibilities of PCCs, which is still in the process of implementation.

What are a PCC’s most important statutory functions?

These are the main PCC functions and the associated legislation where these are found:

What other statutory responsibilities does the PCC have?

This section lists PCC powers and duties in key areas of activity. It is by no means exhaustive but sets out the main points that PCCs, the public and others interested in the role of PCCs may wish to know.

Police and Crime Panels (PCPs) are made up of local councillors and some independent members. They were put in place to scrutinise and support the work of their local PCC and can require the PCC to appear before the PCP to answer their questions.

The PCP is required to support the PCC and provide a check and balance in relation to the performance of the PCC.

The PCP does not scrutinise the Chief Constable – it scrutinises the PCC’s exercise of their statutory functions.

While the PCP has a role in challenging the PCC, it must also exercise its functions with a view to supporting the effective exercise of the PCC’s functions.

The Policing Protocol goes on to provide a list of the main functions and powers of the PCP, the most important of which are:

If the PCP seeks to scrutinise the PCC on an operational matter, the Chief Constable may be invited (but cannot be required) to attend alongside the PCC to offer factual accounts and clarity (if needed) of the Chief Constable’s actions and decisions.

The accountability of the Chief Constable remains firmly to the PCC and not to the PCP.

The PCC must issue a Police and Crime Plan as soon as possible after the PCC takes office. It should cover the PCC’s full term of office but may be revised at any time.

The PCC must consult the chief officer of police (i.e the Chief Constable or Police Commissioner in some areas) and have regard to the PCP in making or revising the plan. The plan must set out the PCCs policing and crime objectives, details of grants made to partners, resources the chief police officer will be given and how he/she will be held to account/assessed.

The PCC must hold the police fund and other grants from central or local government. PCCs must set the policing precept (an element of Council Tax) for their area. Note that the PCP has powers of veto over the precept.

Further information on finance and audit aspects can be found in the separate briefing notes. [PRSRA, S21-27; Schedule 5; and Local Government and Finance Act 1992, S39-43]

PCCs must obtain the views of local people and victims of crime before the Police and Crime Plan is issued and before the precept is set (the latter must also including obtaining the views of rate payers).

The PCC must publish information about their performance and that of the chief officer, and the material required by the Specified Information Order.

The PCC must give the PCP the information it requires to carry out its function and must also publish an annual report which must be presented to the PCP at a public meeting. [PRSRA, S11-14; and Schedule 11]

The PCC must appoint to the Office of the PCC (OPCC) a Chief Executive and a Chief Finance Officer (who must be separate people) and may appoint a Deputy PCC: new appointments to all three of these posts are subject to confirmation hearings by the PCP, but unlike the other OPCC posts, a Deputy PCC does not have to be appointed on merit and is not politically restricted.

The PCC may appoint other staff to his or her office as required, without confirmation hearings (including, for instance, assistant PCCs), but these must all be appointed on merit and are all politically restricted posts.

The P&CA introduced responsibilities to:

The PCC has direct responsibility for complaints against the Chief Constable but must hand this to the Independent Office of Police Conduct (IOPC) to investigate. Once the complaints provisions of the P&CA are implemented, the PCC will also be responsible for handling the reviews of less serious misconduct cases (IOPC handles the more serious cases).

The PCC can put in place additional steps to handle initial contact with the public about complaints and also steps to keep complainants informed about progress. Equally, the PCC can leave these functions with the force and retain oversight of force handling. Under the P&CA the PCC now has a specific duty (previously an implied duty) to hold the Chief Constable to account for force complaints handling. [P&CA S13-24; Parts 2-3 of the Police Reform Act 2002, as amended; and Part IV, Police Act 1996, as amended]

PCPs are responsible for handling complaints against the PCC. If the allegation is serious (i.e. meets a criminal standard), the PCP must refer it to IOPC to deal with, but if it is not a criminal complaint, the PCP is responsible for ensuring the matter is resolved informally. [PRSRA, S31; and Schedule 7]

What powers does the Home Secretary have in relation to the PCC?

The above list sets out the key responsibilities and powers but is by no means exhaustive. The Secretary of State also has powers to make regulations or publish guidance about other key sections of the PRSRA and other legislation.

What other requirements apply to PCCs?

Various other Acts also apply to the PCC, for instance the Equalities Act 2010, the Freedom of Information Act 2000, the Data Protection Act 2018 etc.