Currently about 55 per cent of funding comes from the Government while the remaining 45 per cent is raised locally, mainly through the police precept. The precept is set by the Commissioner and is the amount you pay for local policing in your council tax. It is forecast that by 2020 around half of the funding available for policing in North Yorkshire will be raised locally. 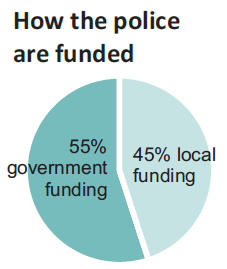 If you take into account the effect of inflation, the reduction amounts to approximately £30 million in real terms. The resources allocated to the Chief Constable to deliver policing are set out in the Medium Term Financial Plan. 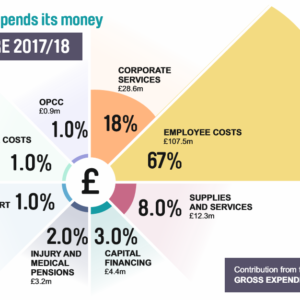 In addition to consulting widely on the contents of this Police and Crime Plan, specific consultation has taken place on whether the public of North Yorkshire are prepared to pay more locally to support local policing. Over 65% of those people who have responded to the consultation surveys, over the last 3 years, have supported an increase of at least 1.99%. These annual increases equate to an additional 8 pence per week for the average (band D) property.
2017/18 Police precept consultation

The Police and Crime Commissioner will continue to consult the public on any increases to the police precept each year. To make the most of our funding for frontline policing and public services, and in order to achieve this plan, it is important that we strip out bureaucracy and ensure our processes are as efficient as possible to save money. The Commissioner will continue to hold the police to account where there is evidence of inefficiency.

Alongside her commitment to financially supporting commissioned services in North Yorkshire, the Commissioner is committed to reducing crime and disorder by supporting local community safety services through a grant fund. She is also continuing to support local groups trying to make their communities safer via the Community Fund which distributes £250,000 per year in grants.