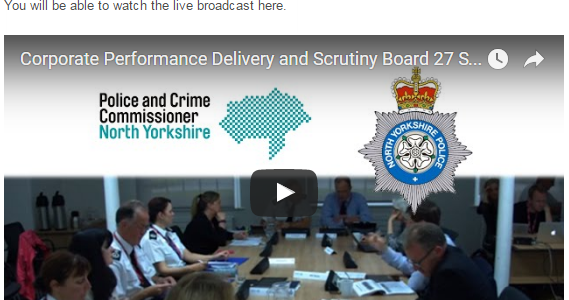 Following the successful introduction of live-streaming of the North Yorkshire Police Corporate Performance, Delivery and Scrutiny Board, the Police and Crime Commissioner and Chief Constable are again inviting the public to send in questions about the agenda items for the next meeting on Tuesday 27 September at 13:30.

Viewers of the live broadcast also have the opportunity to ask the Board questions via Twitter by using #NYPscrutiny.

The main agenda item this month reports on how the police are progressing against the delivery of ‘Operations’ outcomes. These are:

These outcomes have been developed to support the delivery the priorities set out in the Police and Crime Plan.

This meeting will also hear updates on:

Questions received from the public that relate to the agenda and are received in advance of the meeting, will be addressed by the Board during a 15 minute period at the beginning of the meeting.

Questions received from the public via Twitter using #NYPscrutiny and that relate to items discussed during the meeting will be answered at the end of the meeting.

The agenda and papers can be found here – Corporate performance, delivery and scrutiny – 27 September 2016

To ask a question:

There will be a cut off point for asking questions, this will be announced during the meeting.

To watch the Performance, Delivery & Scrutiny Board meeting live: