North Yorkshire Police has revealed the truth behind ten common myths about mobile safety cameras in a bid to highlight why they are used.

They include the true effectiveness of camera vans at reducing casualties, why certain locations are chosen over others and whether enforcement cameras are a “money-maker” for the force.

Called “If you saw what I saw…” the campaign uses the first-hand experiences of officers who deal with fatal crashes to urge motorists to drive more carefully.

Andy Tooke, Criminal Justice Operations Manager for North Yorkshire Police, said: “There’s no doubt that there are a lot of myths out there about safety cameras.

“Everyone’s got an opinion about them. But not everyone knows the full facts about why we use them.

“By busting some of the myths out there, we hope that next time people drive past a camera van, they’ll have a better understanding of why we use them and think about why we want them to drive safely.”

Andy said that safety cameras are just one of a raft of measures used by North Yorkshire Police to reduce deaths and injuries on the county’s roads.

He added: “We want people to drive safely because day in, day out, our officers see the horrific consequences of collisions. They see bodies that have been horrendously injured and have to tell families that they’ll never see a loved one again.

“There’s only one reason we use mobile safety cameras – to reduce the number of casualties on our roads. And it’s independently proven that they do this.

“If you saw what we saw, you’d understand why that’s so important to us.”

In the next few weeks, North Yorkshire Police will be sharing more information about the role of mobile safety cameras and how they are used to improve road safety.

The force will be revealing the ten North Yorkshire locations in which drivers are most likely to encounter a camera van, the highest speeds recorded by safety cameras in residential 30mph zones and more in a bid to encourage motorists to drive more safely.

Truth: Casualties on North Yorkshire’s roads have dropped by 20% as a direct result of us introducing camera vans, according to independent studies by Newcastle University. 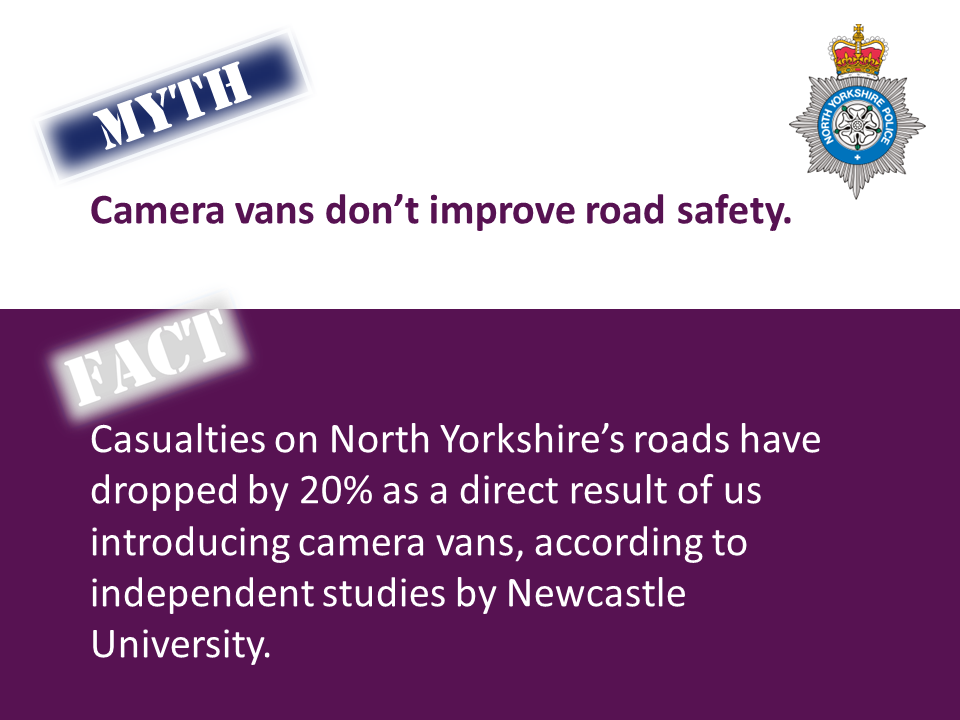 Truth: They’re not – last year they cost slightly more to run than they generated. Finances are made public every year. We use them because we genuinely want to make our road safer. 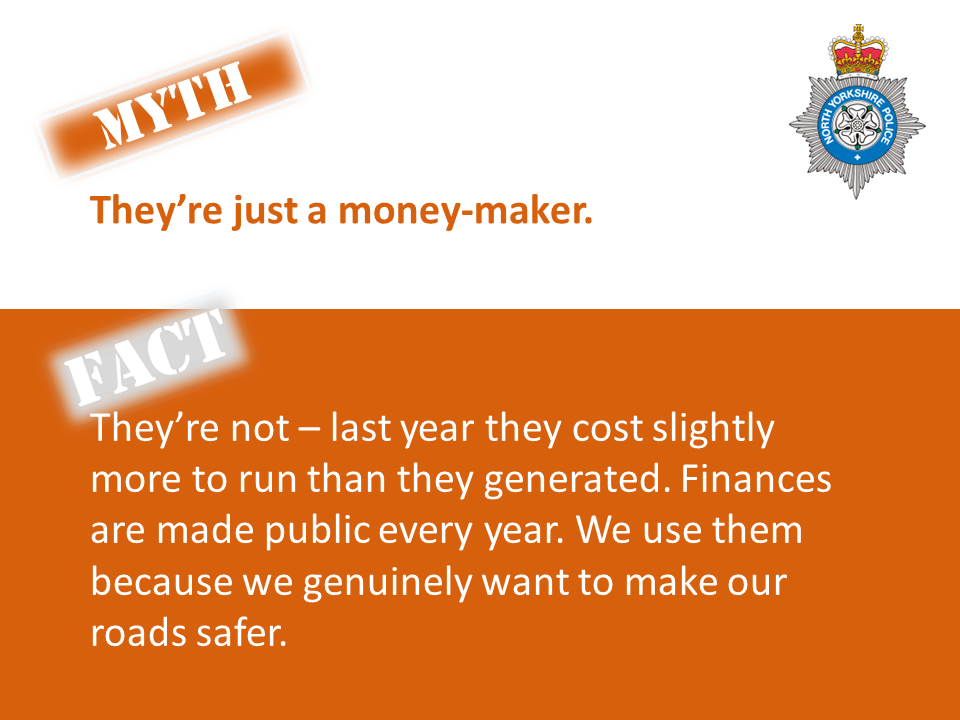 Myth 3: You park camera vans in the locations that make the most money.

Truth: We decide where to deploy our camera vans based on lots of different factors based on threat, risk and vulnerability. These include intelligence around previous collisions, traffic flow, events happening in an area, demand from communities and even the weather. We never consider locations based on the revenue they could generate. 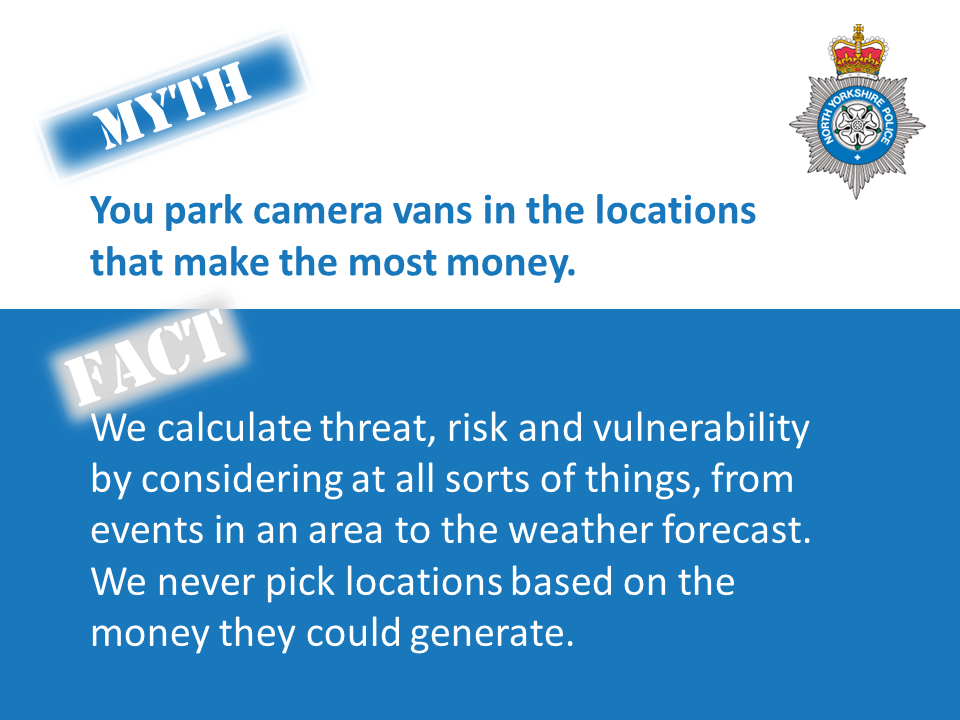 Truth: There are 12 police safety camera vans and one motorcycle covering 6,000 miles of roads in North Yorkshire. 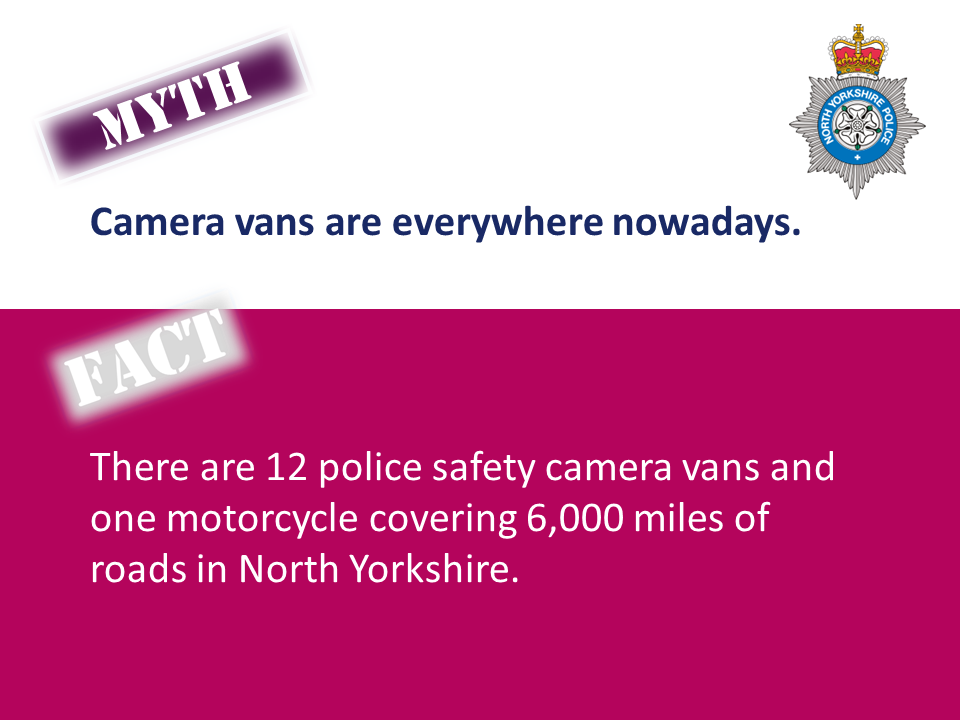 Myth 5: I only see camera vans on dual carriageways and A-roads.

Truth: We cover hundreds of sites that include villages, towns and other residential areas. In fact, these are often a priority for us. More people see camera vans on dual carriageways as these are generally the roads with the highest traffic flows and unacceptably high speeds, and single carriage A-roads are statistically our most dangerous. We also run Community Speed Watch – a scheme to help residents tackle speeding and improve road safety in their community. 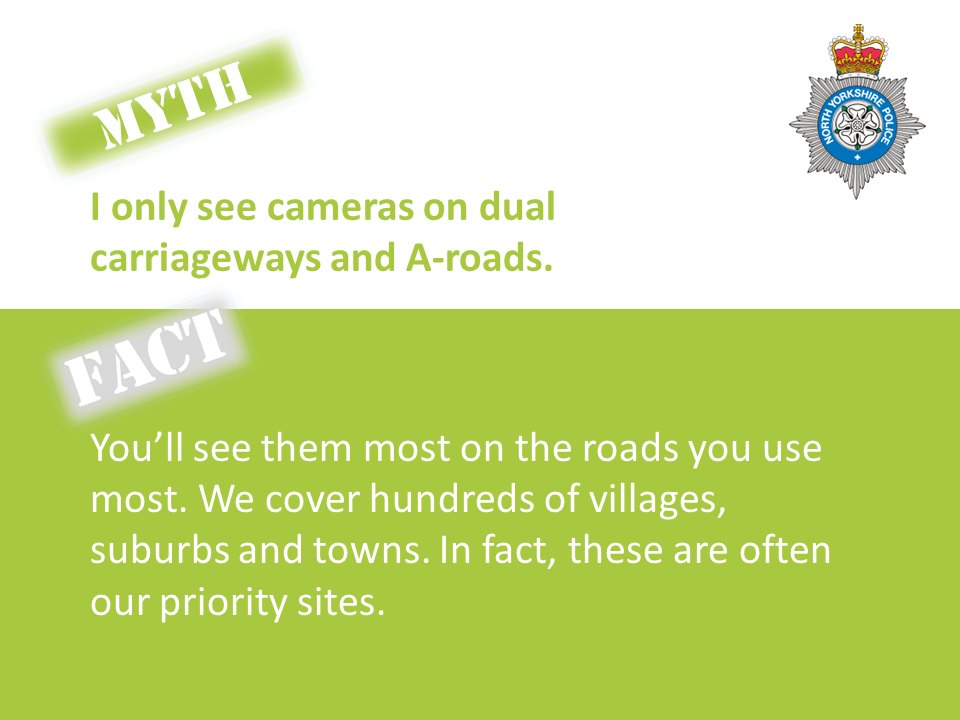 Myth 6: You try to catch motorists out by using camera vans stealthily.

Truth: Our camera vans are covered in reflective markings so they’re highly visible, even at night. We assess all camera van locations to ensure there’s a clear eyeline with no obstructions. 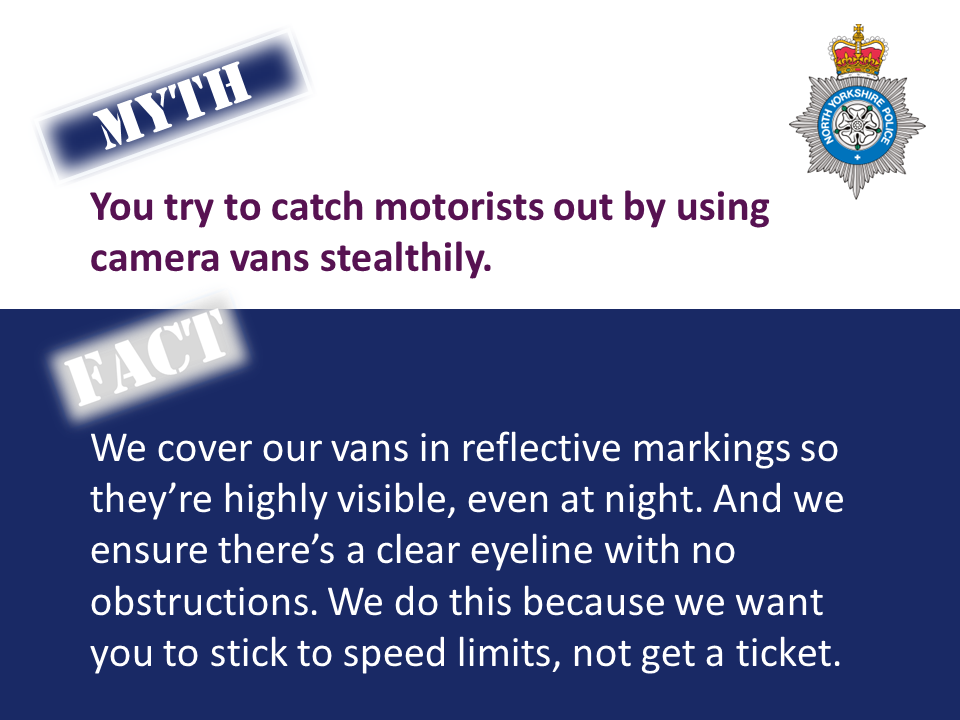 Myth 7: If I fit a laser jammer to my car, I can avoid getting caught by blocking the camera’s laser.

Truth: Our operators are trained to tell if a laser jammer is used. We investigate and charge people who use laser jammers and some motorists have been jailed for using them. 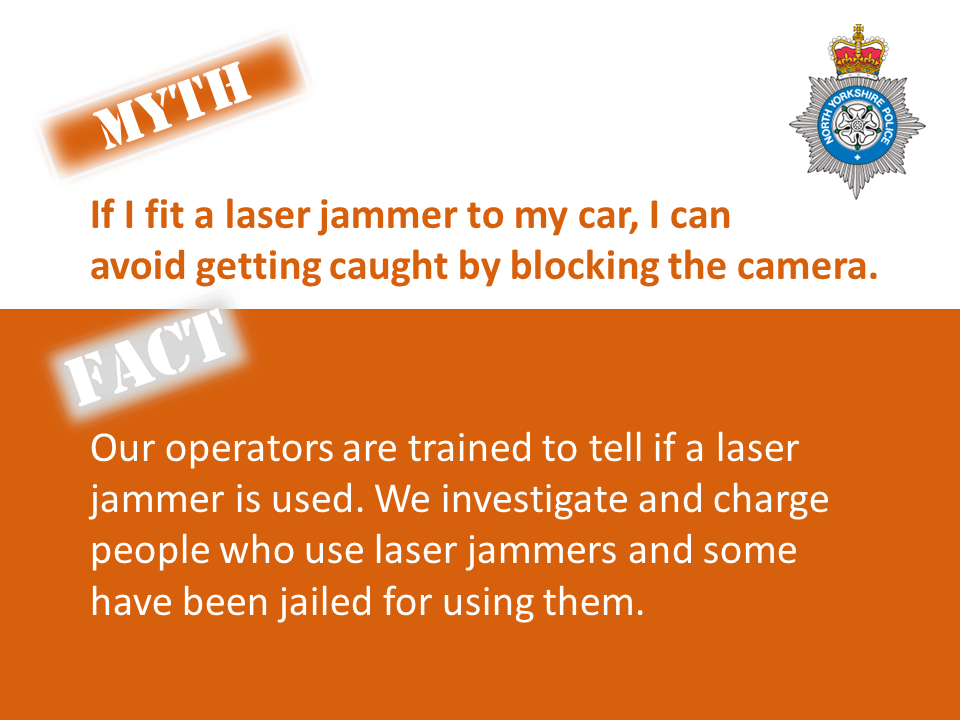 Myth 8: Police officers should be out solving crimes, not spend hours sitting in a camera van.

Truth: All our mobile speed cameras are operated by highly-trained police support staff, not police officers. This allows police officers to focus on dealing with other offences and has no impact on frontline policing numbers. 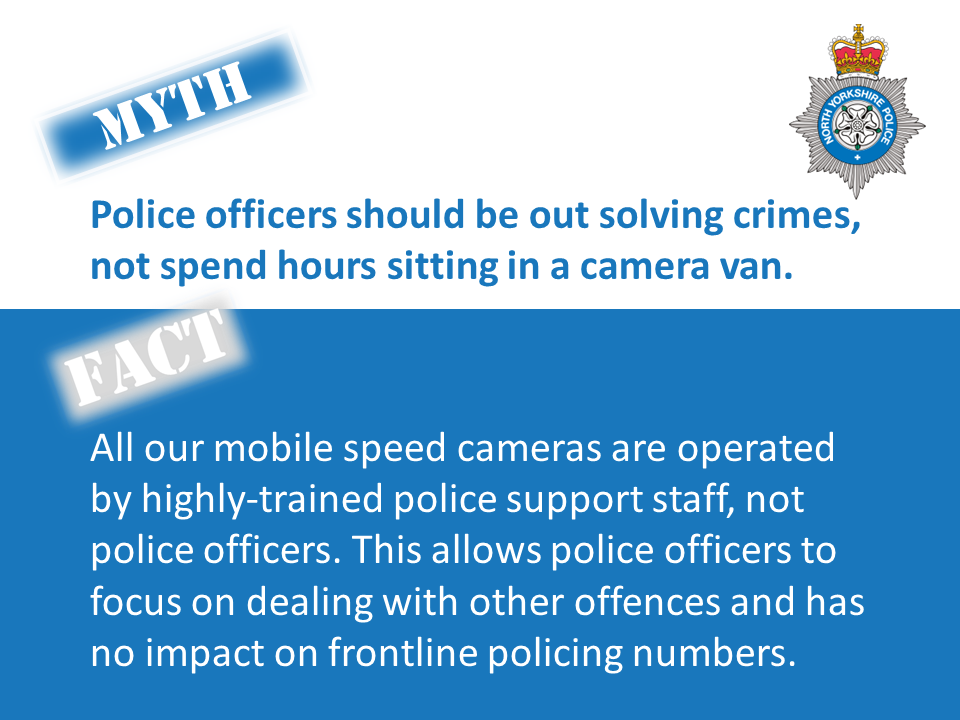 Truth: This is simply incorrect. They enforce a range of offences including driving while using a mobile phone or other distractions, failure to wear a seatbelt, contravening double white lines along with dangerous and careless driving. In addition, they are fitted with automatic number plate recognition cameras to gather intelligence about drivers who come into North Yorkshire and commit crimes such as drug dealing or theft. 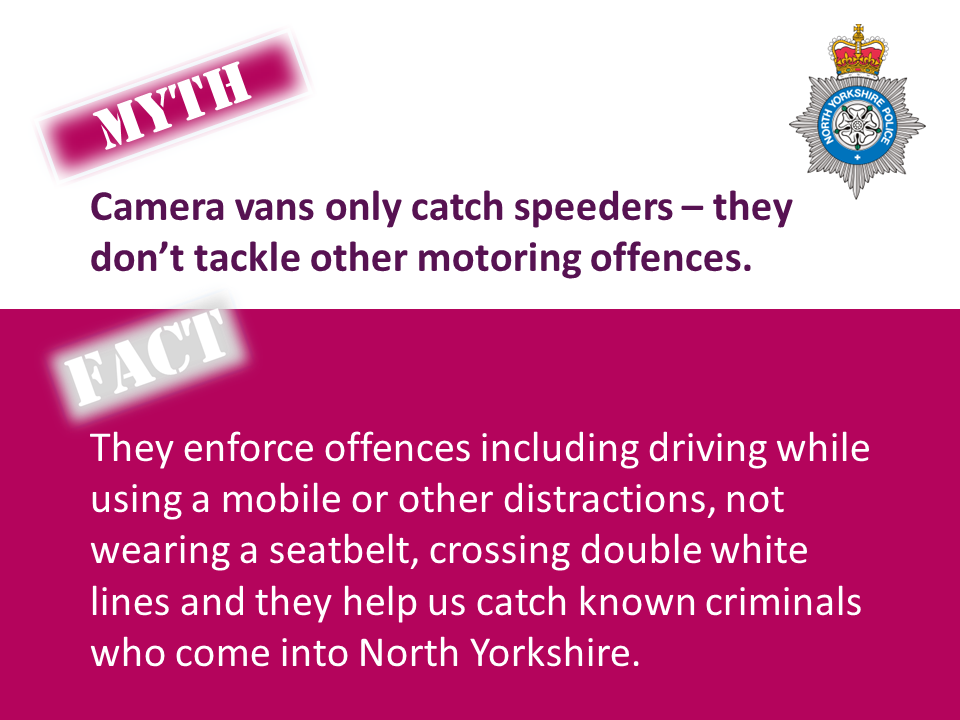 Truth: Our cameras record an average of 5.8 violations per hour across North Yorkshire. If you comply with the rules of the road, you’ll never hear from us – it’s your choice entirely! 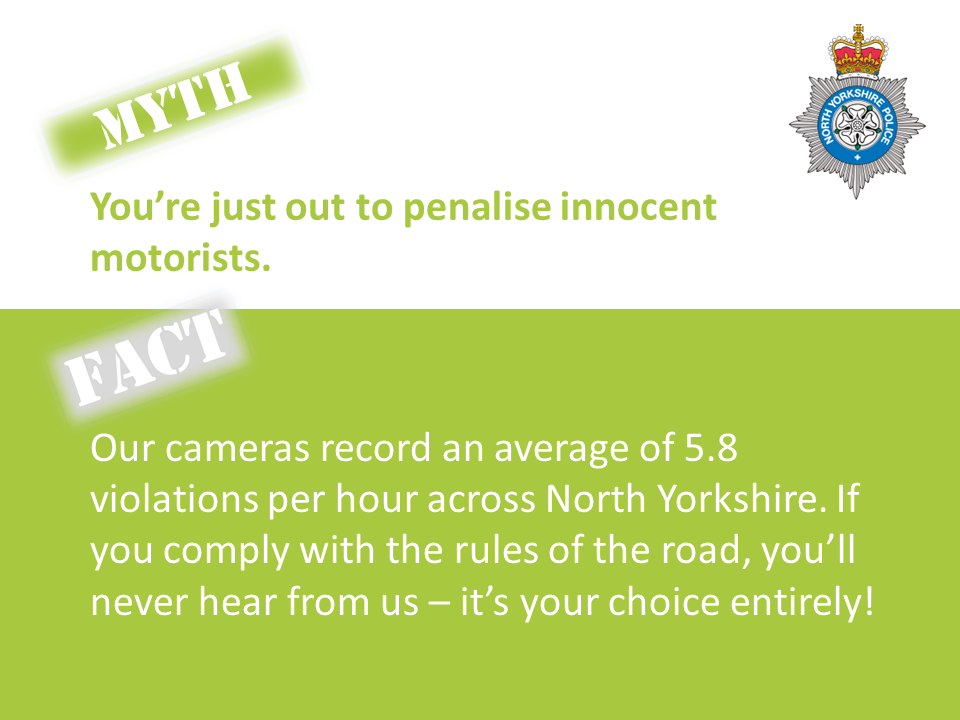