North Yorkshire’s Police and Crime Commissioner is responsible for setting the local police ‘precept’ – the amount people pay through their council tax for policing.

This year, after hearing the views of over 2,000 members of the public, your elected Police and Crime Commissioner, Julia Mulligan, decided to increase the amount of precept for the police by an average of £11.50, or about £1 a month.

This will raise an additional £1.9m next year, which will be put into a ‘Policing Priorities Fund’ to enhance the services important to you. These include:

However, even with this extra money, the police need to make savings of about £10m over the next few years, so investment in new technology and ways of working will need to continue.

Your contribution through your council tax 2018/19

Funding for the police 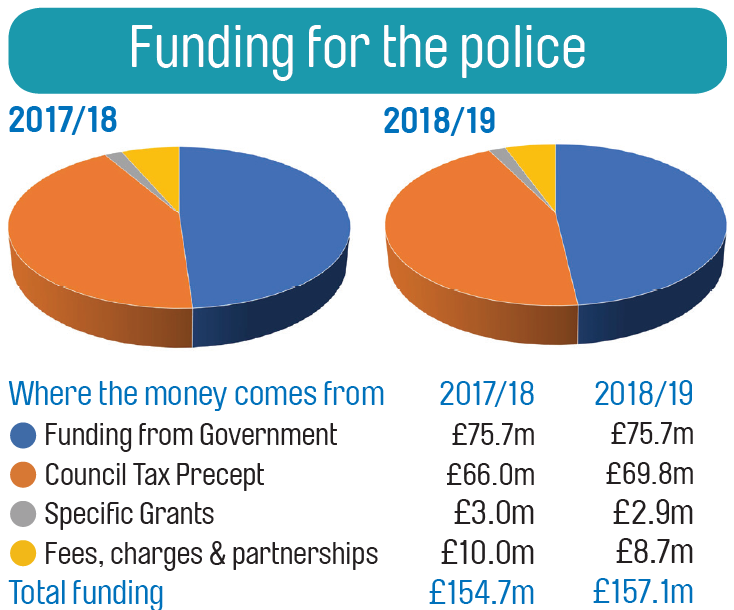 * This includes Community Safety Funding and Commissioned Services, Police Officer Medical and Injury Pensions, Cost of Capital and Use of Reserves. 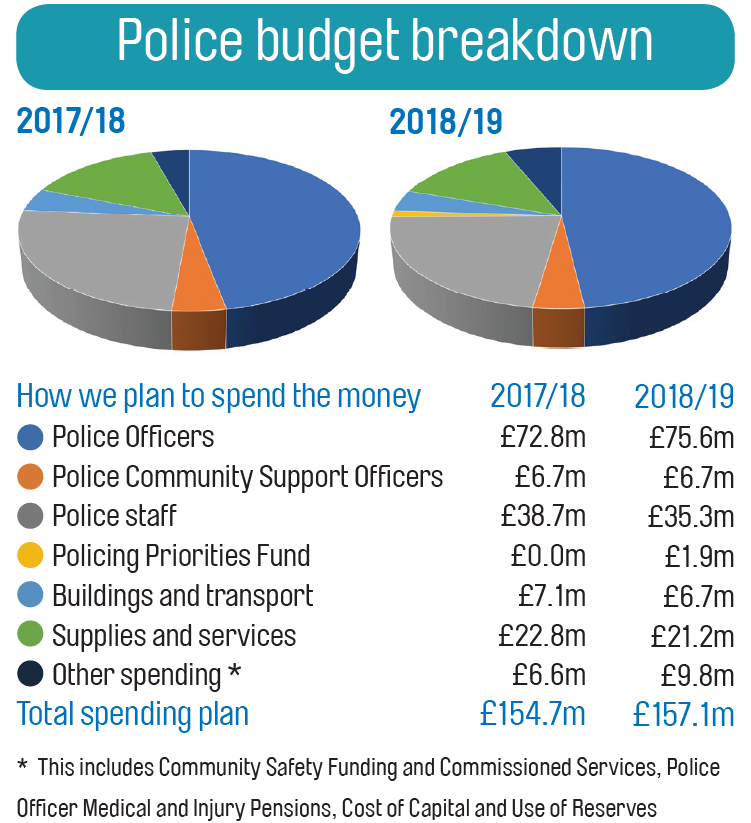 How the money will be spent

This year the Government gave Police and Crime Commissioners the option to increase funding by a maximum of £12 per year, per average household (a ‘band D’ home), or just over 5% here in North Yorkshire.

The results also showed that the public is very supportive of North Yorkshire Police and are prepared to pay more for the vital services they provide.

However, Julia must balance this against what is affordable as she also believes that it’s important for everyone to know what this extra money will deliver.

North Yorkshire Police plans to recruit more Police Officers and Police Community Support Officers (PCSOs), to a maximum of 1,400 officers and 200 PCSOs, the highest numbers since 2012. This money will help keep these plans on track.

Over the past 12 months North Yorkshire Police has received many more calls into the Force Control Room.

As a consequence, people have had to wait too long although the time taken for officers to respond to incidents has continued to be good.

Now, more staff will be recruited to take calls, reducing waiting times and improving the service.

Over the past five years, Julia has dramatically improved victim services, especially for those suffering domestic and sexual abuse. New counselling and telephone support has also been introduced, along with mental health crisis services.

The additional funding will mean new, specialist support for victims of child sexual abuse and people who go missing from home.

North Yorkshire Police still have to make about £10m of savings over the coming years as wage bills are increasing, inflation is higher and bureaucracy is still too burdensome.

As a result, the progress made transforming the service will need to continue, including new technology, greater collaboration and more.

Julia believes that the public should not pay more, when it is still possible to improve efficiency, and expects to see real progress on making savings before this time next year.

Policing is continuing to evolve in North Yorkshire as it responds to the changing nature of crime and demands on our police service. 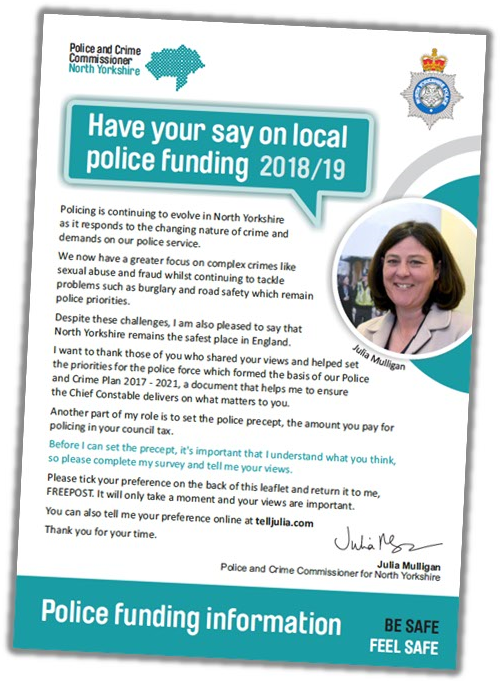 We now have a greater focus on complex crimes like sexual abuse and fraud whilst continuing to tackle problems such as burglary and road safety which remain police priorities.

Despite these challenges, I am also pleased to say that North Yorkshire remains the safest place in England.

I want to thank those of you who shared your views and helped set the priorities for the police force which formed the basis of our Police and Crime Plan 2017 – 2021, a document that helps me to ensure the Chief Constable delivers on what matters to you.

Another part of my role is to set the police precept, the amount you pay for policing in your council tax.

Before I can set the precept, it’s important that I understand what you think, so please complete my survey and tell me your views.

There are three options I would like to hear your views on, these are:

How is North Yorkshire Police funded?

About 53 per cent of funding comes from the Government while the remaining 47 per cent is raised locally, mainly through the ‘police precept’ – the amount you pay for local policing in your council tax.

Over the past seven years, our central funding has been reduced from £87 million in 2010/2011 to a forecast £67 million in 2018/19. If you take into account the effect of inflation, this equates to nearly £40 million in real terms.

What would happen if we froze the precept?

If we froze the precept, taking account of increasing costs previously mentioned and inflation, this would effectively mean a cut to North Yorkshire Police’s budget.

This would come at a time when certain types of crime are putting increasing pressure on the police, especially neighbourhood policing. These include services to protect the most vulnerable people in our society, particularly our children, people at risk of domestic abuse and hate crime.

What would happen if we increase the amount we pay by 1.99 per cent?

This would raise just over £1.3 million for next year and – importantly – subsequent years.

However, it would mean the average household paying 8p a week, which is £4.40 a year, more.

Can we increase our contribution by more than two per cent?

Yes. But the Government will only allow that if we carry out a local referendum which could cost at least £700,000.

Your views are important so please let me know what you think by:

Thank you for your time