How much are you willing to pay for your Police and Fire & Rescue Service?

As the Commissioner launches her annual precept consultation, Julia has criticised the government over plans to cut the amount that can be raised for the fire service. The proposals from government will leave a c£200k hole in the budget of North Yorkshire’s fire service and gives fire a worse deal than most local councils in the county. 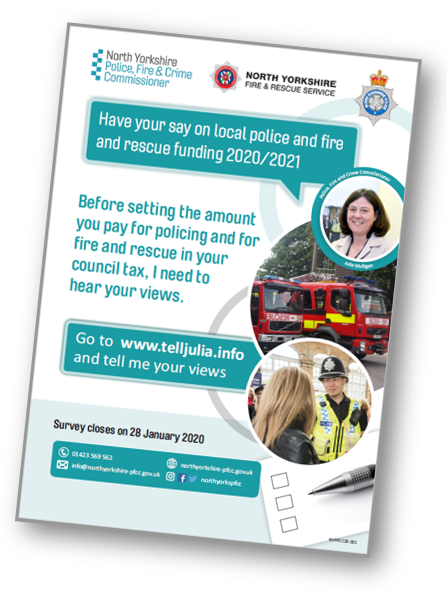 Although the government has not yet announced its proposals for the police, the service is likely to be in much better position, depending upon the final options put forward by Julia Mulligan.

A survey begins today (15 January) where Julia is asking taxpayers how much they are willing to spend and the conclusions will be taken into account when a proposal is put forward to the Police, Fire and Crime Panel next month. It will remain open until midnight on 28 January.

The survey can be completed at www.telljulia.info.

“I was hugely disappointed by the Government’s decision to limit my ability to support North Yorkshire’s Fire and Rescue Service. Given our challenging financial circumstances, it is an unwelcome blow given the hard work that has been done over the past year to balance our budget.

“I have made my views to ministers very clear on the matter, and I will continue to make the case for our fire and rescue service.

“Putting these concerns to one side, I need your views on what you’re willing to pay for local policing and fire services. This is something I have done every year since being elected and it is a vital part of the process of setting the precept. It’s quick and simple to do so I would encourage everyone to have their say.”